Italy boasts many precious monuments and architectural beauties, but the castles are certainly among the most evocative in terms of charm. Perched on majestic mountains, immersed in fairy-tale landscapes or lapped by the waters, castles and fortresses tell us long-gone stories, on the border between reality and legend.

The fortresses are very similar to castles, fortification works consisting of a wall of considerable thickness and towers. Generally, they are found in very suggestive villages or historical centres, places that bring images of princesses, knights and battles to mind. Here below is the list of some of the most fascinating ones.

Thanks to its majesty and grandeur, the Monteriggioni fortress, in the province of Siena, has a natural tourist vocation. Every year, in fact, over 70,000 visitors go to admire the famous Tuscan castle, which shows itself in all its magnificence. 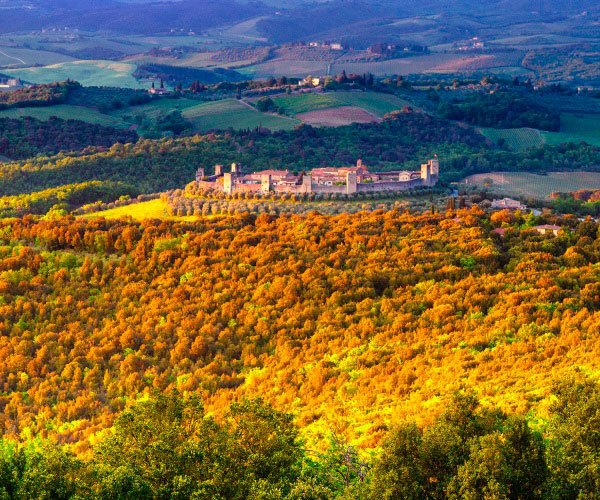 It is no coincidence that one of the most illustrious tourists, who arrived from Florence, was so impressed that he dedicated some verses to his most famous work. We are talking about Dante, who was inspired by Monteriggioni for the giant fixtures in the abyss of Malebolge, in Dante’s Hell.

Inside the Gran Sasso and Monti della Laga National Park, at 1460 m, stands the Rocca di Calascio, in the province of L’Aquila. The imposing medieval structure, all built in white stone, is one of the highest in Italy. Perched in the mountains, it overlooks the ancient village below, now uninhabited. Its undoubted charm has made it a perfect setting for several films, including the unforgettable “Ladyhawke” and “The Name of the Rose”, but also the most recent “The American” with George Clooney. 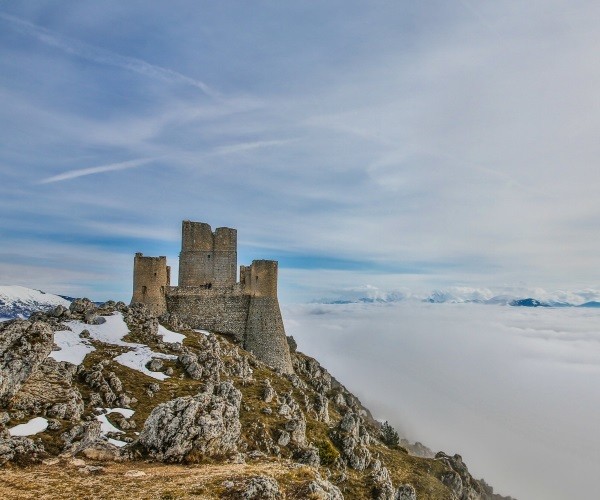 It stands on an islet and is connected by means of a masonry bridge to the ancient Borgo di Celsa, today known as Ischia Ponte. Thanks to Alfonso V of Aragon, access to the castle is possible through a tunnel dug in the rock. Before then, it could only be accessed by the sea. The tunnel, 400 meters long, is illuminated by high skylights which at the time also acted as “seals” from which boiling oil, stones and other materials were thrown at any enemies. In this castle, in 1952, some scenes of the film “The Crimson Pirate” were shot with Burt Lancaster.

It is one of the most complete and best-preserved castles in Italy. This castle, located in Sirmione, is a rare example of a lake fortification. The castle is bathed on all sides by the waters of Lake Garda. On one side there is the dock, on the other the imposing keep, with the cells intended for prisoners. The walls and the three main towers have dovetail battlements. It is possible to access the walkways and also reach the top of the latter, as well as enjoy the splendour of the dock. A sad legend of love wants Ebengardo’s soul to roam the castle in search of his Arice on stormy nights. 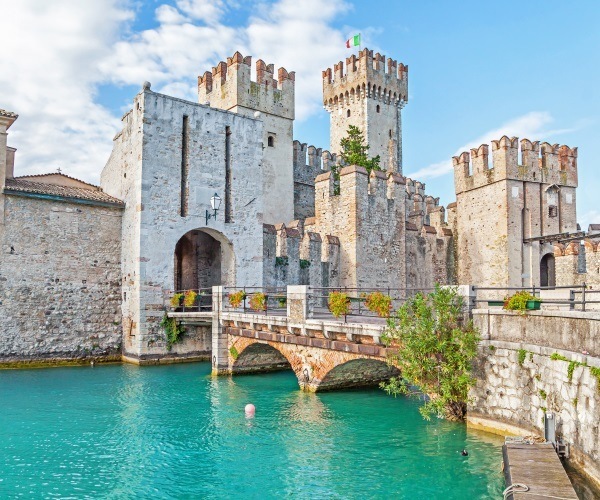 It is certainly one of the most mysterious in Italy, it is a 13th-century building built by Emperor Frederick II, near the town of Andria. Its octagonal plan with an octagonal turret for each edge suggests that Castel del Monte was built according to precise mathematical-astronomical geometries, as well as taking into account numerous symbolisms. It does not have any moat or military architectural element, it does not reside in a strategic position, it has narrow spiral staircases definitely uncomfortable for defence and escape functions, loopholes too narrow to throw arrows, and no stables. Its unusual shape also seems to recall that of a crown. 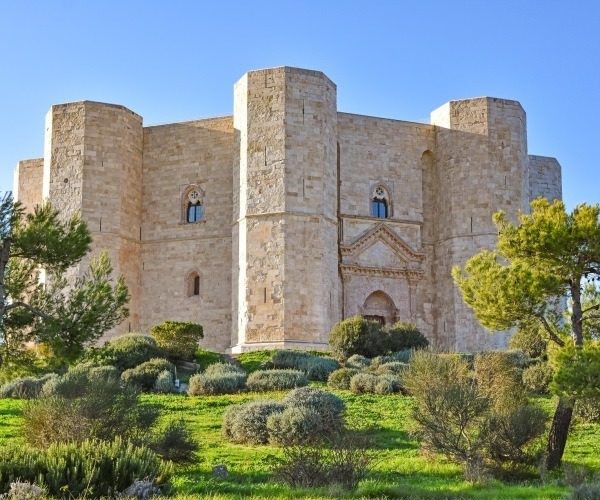 The castles in the Niccone Valley, Umbria/Tuscany border

11 miles long, where Tuscany meets Umbria, the Niccone valley owes its name to the Niccone stream, a tributary of the Tiber which is located between Umbertide and Cortona. This long, wide and quiet valley is a well-known holiday destination for selective travellers from all over the world. Along the valley stand out the peaks of castles and some ‘borghi’, in other words, fortified villages, built during the Middle Ages. These constructions testify to the political and military tension by the Papal States for the expansion of territorial neighbours.

The northern valley wall mainly resides in Tuscany from which, continuing towards Umbria, it is possible to see the remarkable ‘Castello di Pierle’ sitting at the most extreme western part of this wide valley. Built on the eastern side of Mount Maestrino, the imposing castle dominates the fertile valley just like a majestic eagle. Reaching the castle, its height appears almost disproportionate to the modest size of the hill where the castle is located. Around the castle, there is a small church and some old houses where a few people live in total tranquillity together with some domestic animals.

The oldest castle in the entire valley is the Lisciano Castle, dating back to the 9th-10th century. Built in 1202 by the Marquises of Monte, it was protected by Perugia and then returned under the Papal government in 1479. The castle was also owned by the Marquises of Sorbello. Unfortunately, only a few ruins are left of this castle today.

If you are reading this article anywhere other than on A Luxury Travel Blog, then the chances are that this content has been stolen without permission.

Please make a note of the web address above and contact A Luxury Travel Blog to advise them of this issue.

Thank you for your help in combatting content theft.

The Sorbello castle looks so different from the others because it is one of the very few castles in the area that has Ghibelline traditions, as its crenellated towers demonstrate. The primitive bulk of this building dates back to the 10th century, while the south side dates back to the 12th century; in 1600 it underwent radical changes and first, it became a representative palace, then a villa instead. Its history is closely linked to the events of the Marquis de Bourbon of Monte S. Maria Tiberina. Inside the castle, the noble apartments are full of magnificent ceilings and chests of drawers. Interesting is the waiting room, decorated with beautiful 17th-century paintings, and the throne room, where the Regent handled justice.

The castle of Reschio is located on the border between Perugia and Tuscany, in the municipality of Lisciano Niccone, on a hill about 3 kilometres from the public road of the Niccone valley. In the Middle Ages, the castle was long disputed by the Lords of Perugia, Florence and Città di Castello for its location and various housing units. Located inside a private estate, the castle grounds host a few luxury villas available for holiday rentals.

Leaving Umbertide, towards the direction of Città di Castello along the Tiberina 3Bis, on the left appears in the middle of the greenery, the castle of Montalto with its high tower. In ancient times this castle was a fortress of great strategic importance for the defence of Fratta against the expansionist targets of Città di Castello. 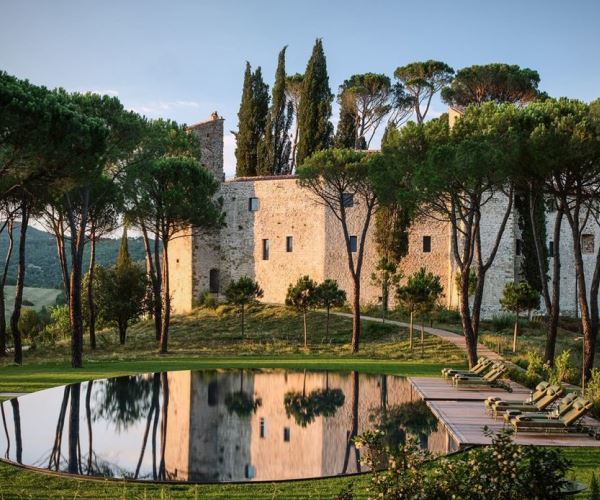 Daniela De Luca is CEO at Home in Italy. Home in Italy is a luxury villa rental company offering high end holiday villa experiences throughout the best regions of Italy since 1993.

The best resort in the Maldives

3 Days in Amsterdam: What Not to Miss