An Israeli man was killed and two were injured in a shooting attack outside a settlement outpost in the northern West Bank on Thursday night, officials said.

The victim was named as Yehudah Dimentman, 25, a father of one from the West Bank settlement of Shavei Shomron.

The terror attack was reported along the road just outside the Homesh outpost, west of Nablus and north of Shavei Shomron, the Israel Defense Forces said.

Dimentman and the two others who were injured were shot in their car as they left Homesh, a settlement that was meant to have been abandoned as part of a 2005 eviction, but is now the site of an illegally operated yeshiva.

“The car was hit by an ambush from the side of the road,” said Brig. Gen. Avi Bluth, commander of the IDF’s Judea and Samaria Division, named for the biblical term for the West Bank.

According to Bluth, at least 10 bullets were fired into the car.

Israeli troops were quickly deployed to the scene, setting up checkpoints and blocking roadways throughout the area in an effort to catch the perpetrators.

“We are grabbing any threads there are to pull,” Bluth said.

Medics performed CPR on Dimentman, who suffered a critical neck wound, but were forced to pronounce him dead at the scene.

The other two victims sustained light injuries from broken glass and were taken by ambulance to Meir Medical Center in Kfar Saba, Israel, according to the Magen David Adom ambulance service.

“We left Homesh, and when we came to turn left we suddenly heard a burst of gunfire,” Aviah Entman, who was hurt in the attack, told reporters from the hospital.

“I felt a strong blow on my left arm and shouted at the driver to drive fast. Someone behind me in the car shouted that he was hit in the neck,” Entman added. 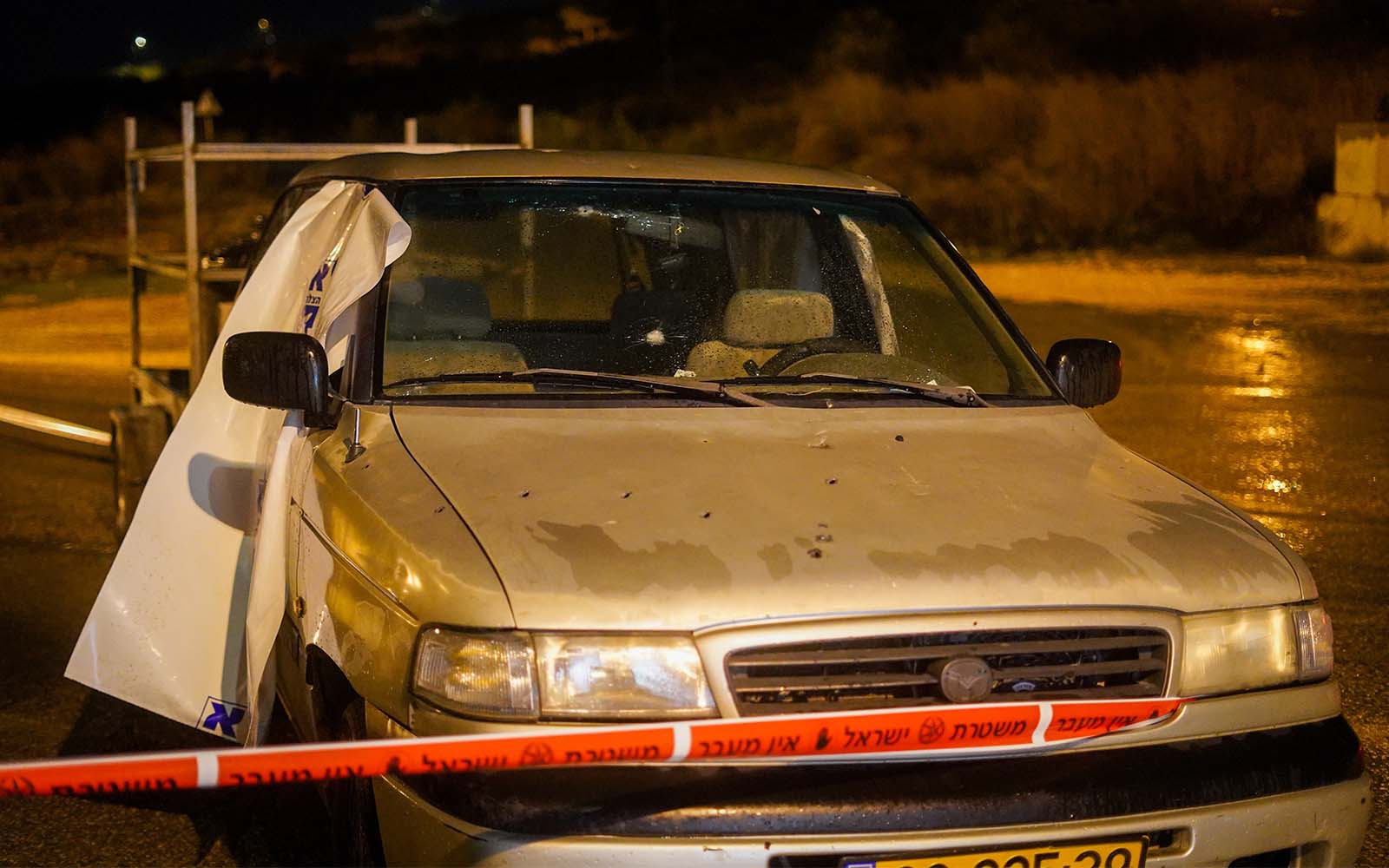 The vehicle that was fired on in a terror attack near the Homesh outpost in the West Bank, December 16, 2021. (Hillel Maeir/Flash90)

Bluth said reinforcements were being brought into the area in the form of three infantry battalions, special forces and intelligence collection units.

The West Bank commander refused to comment on the investigation, including who the military believed was behind the attack and where it was focusing its search efforts. 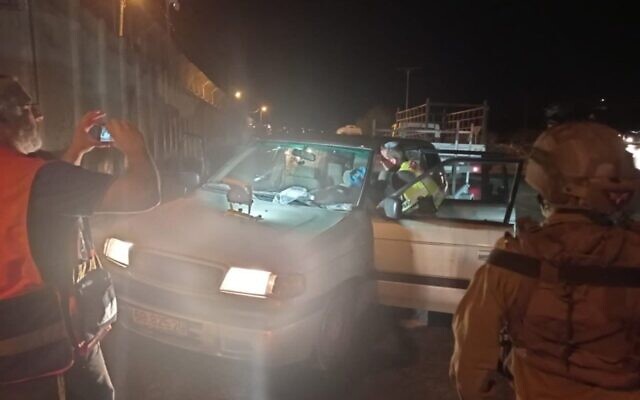 Paramedics work at the scene of a shooting attack near Homesh in the West Bank, on December 16, 2021. (Magen David Adom)

Responding to the attack, Prime Minister Naftali Bennett said in a statement that Israeli security forces would “soon get their hands on the terrorists” behind the shooting.

He also sent his “heartfelt condolences” to the Dimentman’s family.

“We are continuing to raise our alertness and readiness against terror in Judea and Samaria and will continue to use all our capabilities on all fronts against terrorist organizations,” Gantz said in a statement.

The Palestinian terror groups Hamas, Islamic Jihad and Popular Front for the Liberation of Palestine praised the attack, but did not immediately take responsibility for it.

“Hamas blesses this heroic operation in Nablus against the occupation forces and the murderous settlers,” said Hamas spokesperson Hazim Qasim. “This operation proves yet again that our heroic people will continue their struggle until they expel the occupier.”

Tariq Izz al-Din, a spokesperson for Islamic Jihad’s West Bank branch, said the attack was “carried out by heroic resistance fighters from among our people, which came as a natural response to the crimes of the occupying soldiers and settlers.” 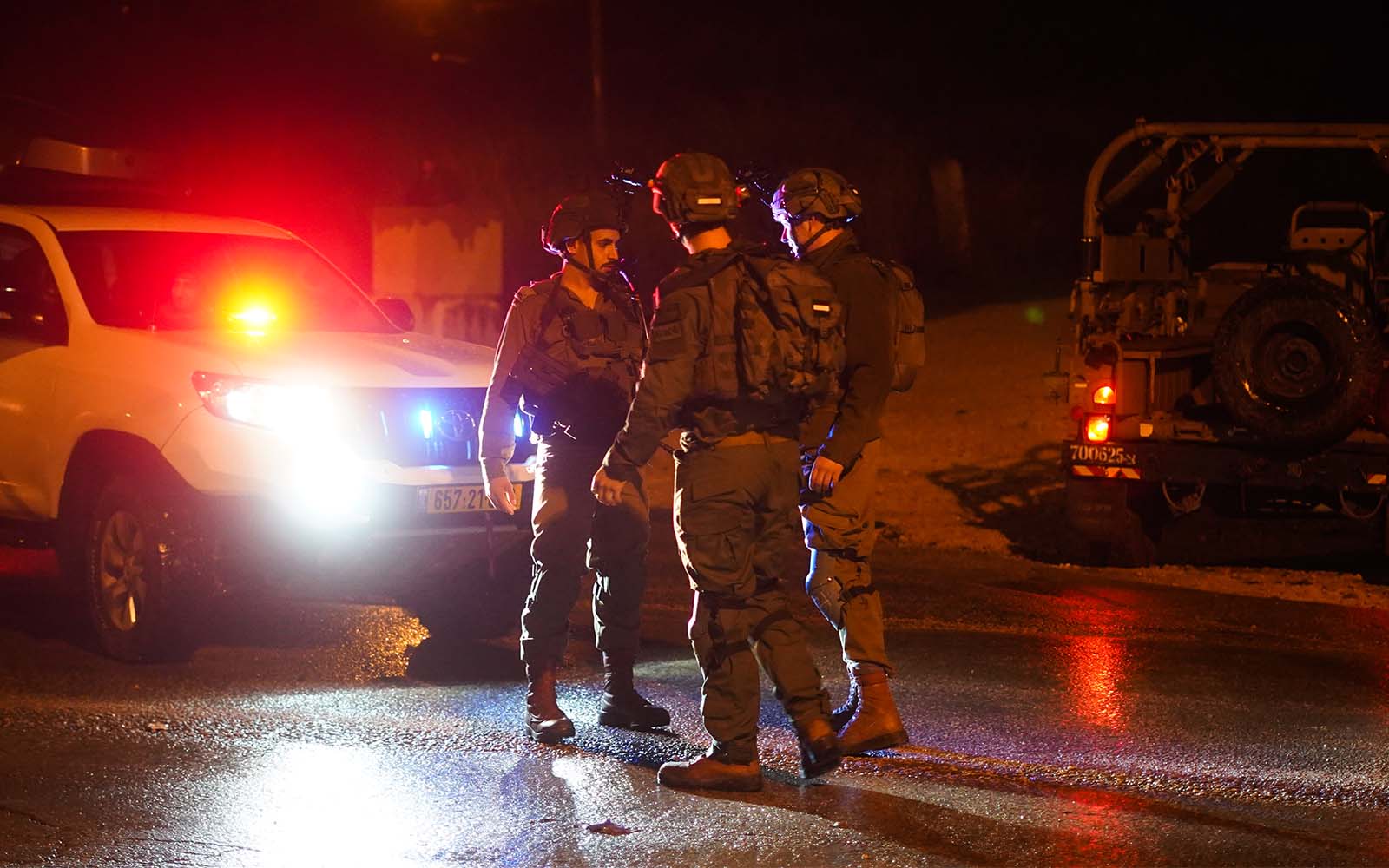 Troops at the scene of a shooting attack near Homesh in the West Bank, on December 16, 2021. (Hillel Maeir/Flash90)

Senior PFLP official Hani al-Thawabta told official Hamas television, “What happened near Nablus is a statement that our people will not submit to the occupation. The message of the cities of the West Bank is that we will address the occupation in the language of bullets.”

Dimentman’s funeral procession will leave from Homesh at 9 a.m. on Friday, stop at the site of the shooting, then continue to Jerusalem. The funeral will be held at 12 p.m. in Jerusalem’s Givat Shaul cemetery, a settlement spokesperson said.

The past few weeks have seen a rise in Palestinian terror attacks, with four taking place in Jerusalem alone, including a deadly shooting committed by a member of Hamas.

The Kan public broadcaster reported that, in response to the attack, settlers were preparing to set up new buildings in the illegal Homesh outpost.

Times of Israel staff contributed to this report.

The billionaire battle for the metaverse

Latest news on Russia and the war in Ukraine