I’ve been practicing yoga for about a year and half and I found it’s been great for me in so many ways. When I learned that C2E2 was offering a family friendly Star Wars YogaQuest adventure I knew had to check it out. So this morning I put on a comfortable outfit, some tennis shoes and headed to Family HQ on the show floor.

This unique yoga session was led by Justine Mastin of Blue Box Counseling & Wellness whose business card describes her as a narrative therapist, yoga teacher, podcaster, author and superhero. She was accompanied by a friend who read the Star Wars Stories for us, while Justine taught us a series of poses.

Our all age yoga adventure lasted about 45 minutes and took us through all three stories in the Original Trilogy: A New Hope, The Empire Strikes Back, and Return of the Jedi. But before the galactic fun could start, we needed to warm up with some stretches and put on our imaginary adventure boots. 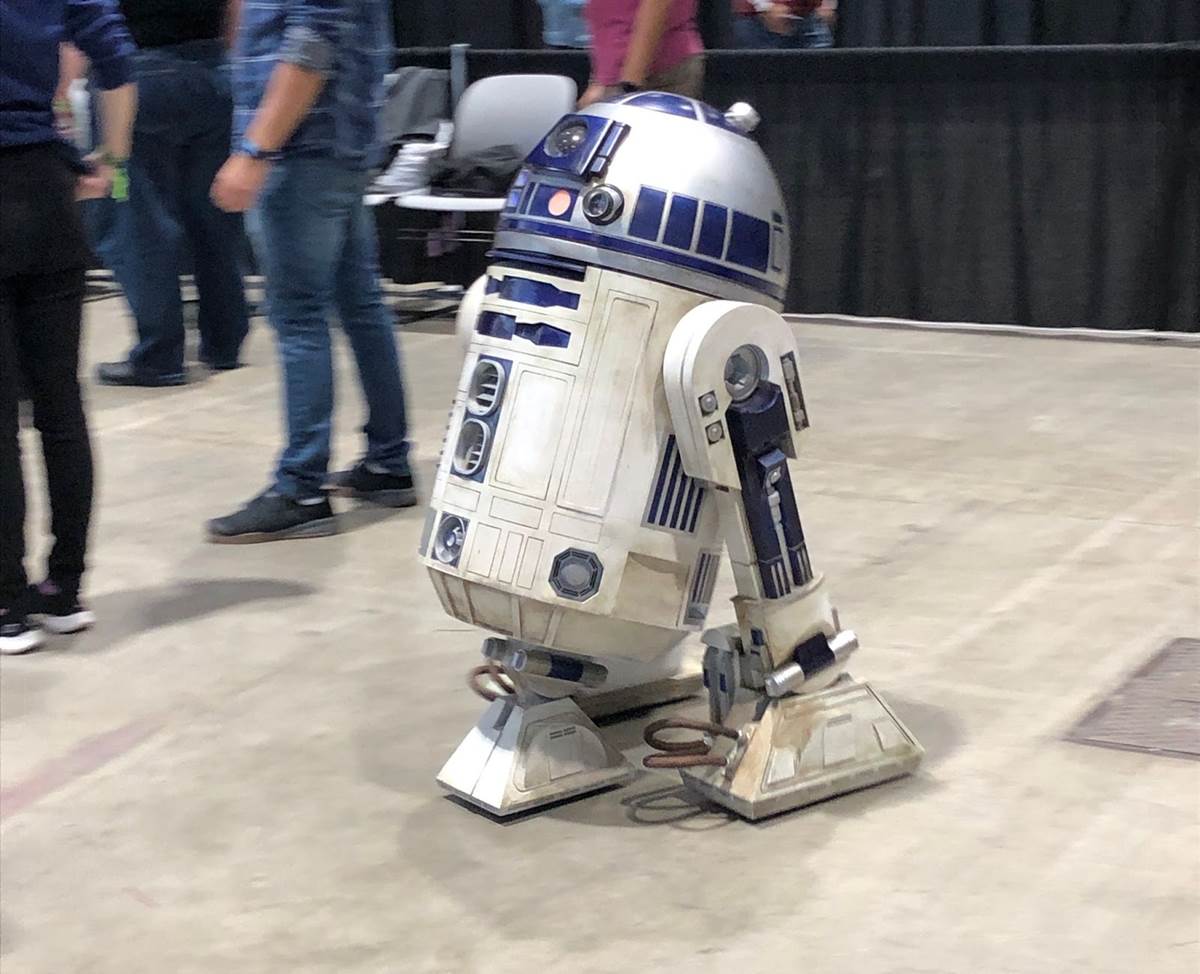 R2-D2 even joined us for a few moments!

Finally we got to the fun part, reliving Star Wars while exercising our minds and bodies! The specially designed course consisted of standing/hands free Hatha style yoga with elements of flow and poses held anywhere from 2 to 15 seconds. Instead of using traditional names for yoga poses, Justine made it extra fun by assigning each pose to a Star Wars character:

We learned the poses while Justine’s friend read the abridged stories which repeated character names and objects multiple times so we could hit each pose. If there was a longer break within the narrative, the story would include the word “continue” as a cue that we could stop holding the pose if we wanted. Since there was a lot to learn at the beginning, It took about 15 minutes to complete the Star Wars: A New Hope adventure while Empire Strikes Back and Return of the Jedi were around 8 minutes each.

After we completed the session, it was time to cool down by taking off our imaginary adventure boots and hat, and stretching to put them back in the adventure closet for next time! Throughout the weekend, convention guests looking for more YogaQuest fun also had the opportunity to attend a Gremlins session on Friday and Lord of the Rings class on Sunday.

Considering I have some experience with yoga, I had no problem holding any of the poses and each stretch felt good for me. That said, this was a beginner friendly class that was accessible for all activity styles and something I’d feel comfortable recommending to others. Want to check it out for yourself? Justine’s site features 14 other YogaQuests and two mini missions. “Nerdmaste!”

Best Pre- and Post-Workout Meals to Fuel Your Sweat Session