HOLLYWOOD BEACH, Florida — Defense Minister Benny Gantz said Friday that he notified US officials during meetings this week in Washington that he had instructed the Israel Defense Forces to prepare for a strike against Iran.

In a briefing with reporters on the sidelines of the Israeli American Council’s national summit in Florida, Gantz said the order he gave was to “prepare for the Iranian challenge at the operational level.”

A senior defense official, speaking on condition of anonymity, indicated that Gantz had presented a timeline for when such an attack might take place during his meetings with US Defense Secretary Lloyd Austin and Secretary of State Antony Blinken, but the source did not specify further.

Gantz told reporters Friday that the US and European countries “are losing patience” and are realizing that Iran is trying to drag out the negotiations, despite “playing a bad hand.”

He said no progress had been made in the recent round of negotiations in Vienna aimed at reviving the nuclear accord known as the Joint Comprehensive Plan of Action.

Gantz said he has urged the US to step up the pressure against Iran.

“There is room for international pressure — political, economic and also military — in order to convince Iran to stop its fantasies about a nuclear program,” he said.

Gantz said the administration officials he met with were attentive to Israel’s concerns, and that he emphasized that Iran is first and foremost a global problem, before it is an Israeli one.

He said he agreed during meetings with Austin and Blinken that the US and Israel would further develop their cooperation against Tehran.

The sides also discussed maintaining Israel’s so-called qualitative military edge over other countries in the region, Gantz said. “There are many steps we discussed that will affect Israel’s ability to be the strongest state in the region for many years to come.”

Gantz acknowledged the Biden administration did not provide a deadline for when it will walk out of talks in Vienna if there is no progress, but he expressed confidence the US would begin considering a military option more seriously if there are no positive developments.

The senior defense official said Iran is close to enriching the amount of uranium necessary to assemble a nuclear bomb and that it will be easier to act against Tehran before it crosses that threshold.

The official acknowledged that American public opinion is not supportive of further military intervention in the Middle East, but said as Iran gets closer to a nuclear weapon, Americans will come around.

“The Americans are still with us, but at the same time, we as Israelis need to understand that the US has broader priorities,” Gantz said separately. 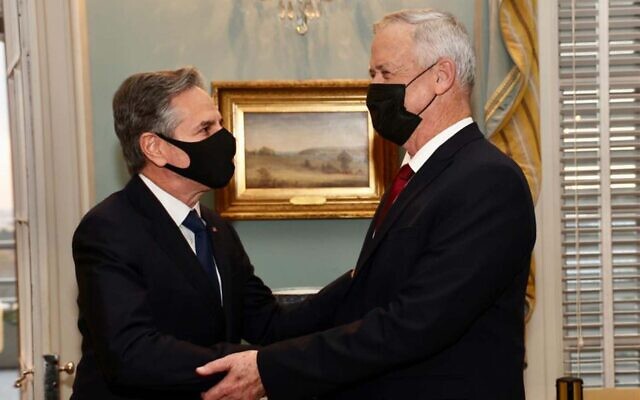 “America is the strongest country in the world, and specifically because of that it does not rush to use force. It typically leaves it to later stages in the matter,” he said.

Gantz also justified the need for three separate Israeli officials — Bennett, Foreign Minister Yair Lapid and himself — to hold conversations with Blinken, even though they all discussed the same issue of Iran. Gantz said each of them placed an emphasis on different issues in their discussions, but they coordinated with one another, he said.

Hours later, a senior military official and a rumored candidate to serve as the next IDF chief of staff said Saturday that while Israel will act independently against Iran if it must, a strike against the Islamic Republic’s nuclear facilities would be difficult without coordinating with the US.

“The desire is always to coordinate with [the US] what we are doing, but at the end of the day Israel is responsible for its own fate and will protect the security of its citizens, Maj. Gen. Eyal Zamir said during a live interview on Saturday at the Israeli American Council conference.

Zamir acknowledged when pushed that “it would be a challenge to launch such an operation without coordinating with the Americans.”

He said that while Israel hopes the US will deter Iran, Israel will act if Washington fails to do so.

He clarified that military action would be a last result and would only be carried out if there is no diplomatic solution to the Iranian problem. He noted that the talks in Vienna are very “worrying” and that all options look very bad as far as Israel is concerned.

Ukraine set to quit ruined Sievierodonetsk as Russians close in