The Rams Road, also known as Sphinx Avenue, has had a long development journey that began 72 years ago with the discovery of the road by Egyptian archaeologists, and efforts have been intensified in the last three years to complete the development and restoration processes.

There are numerous sights in the city, but the Avenue of the Sphinxes is without a doubt one of the “must-see” attractions. This is part of the massive Karnak Temple complex, which stretches along the river’s eastern bank. Pharaoh Sesostris I began the complex during the “Middle Kingdom” period, but it was regularly developed all the way through the Ptolemaic period, which was the last of the Pharaonic era.

The Sphinxes Avenue stretches for around 2,700 meters between the temples of Karnak and Luxor. There is evidence that the Eighteenth Dynasty’s Queen Hatshepsut was the first to construct this processional avenue, complete with sphinxes in her likeness. The sphinx-lined avenue between the 10th pylon of Karnak Temple and the precinct of Mut Temple, as well as to the south of Khonsu temple at Karnak, was first established by Amenhotep III. The project was then put on hold during the reign of Akhnaten, but was resumed by King Tutankhamun, even though the sphinxes had been usurped, altered, and moved numerous times by subsequent kings.

The first phases of the Avenue of Sphinxes, which included the construction of seven chapels, began during Queen Hatshepsut’s reign. Sadly, none of the chapels are still standing today. Pharaoh Nectanebo I chose to enlarge the original complex some years later and built a 2.7-kilometer “pathway” lined on both sides by hundreds of stone sphinxes. Some of the sphinxes have ram’s heads instead of the regular human head, which is a unique trait.

While one might expect that a big and important landmark like the Avenue of the Sphinxes would be always visible, it was instead engulfed and concealed by Luxor’s unrelenting urban growth. Thankfully, in late 2011, the Egyptian government stated that the Avenue of Sphinxes had been restored and that it would be reopened to the public in an official ceremony.

The city of Luxor returned to the spotlight on Thursday 25th of November, with an elaborate parade to mark the grand reopening of the Avenue of Sphinxes after years of painstaking restoration.Following decades of excavation operations, Egypt opened the 3,000-year-old Avenue of Sphinxes to the public in an extravagant ceremony in the southern city of Luxor.The roughly two-mile-long and 250-foot-wide ancient walkway was previously known as “The Path of God.” It connects the Luxor Temple to the Temple of Karnak, which is located just north of the Nile River.A spectacular parade took place along the length of the road, which is flanked on either side by over 600 ram-headed statues and typical sphinxes, statues with a lion’s body and a human’s head, that began after nightfall in Egypt and ended about midday ET.

The attempt to dig and repair the site continued for the next seven decades, but was frequently disrupted by political upheaval, such as the 2011 Arab Spring movement that overturned Egypt’s long-time autocratic ruler Hosni Mubarak and sparked years of civil strife.

Egypt hosted a grandiose ceremony to mark the opening of the Avenue of Sphinx, a historic 1.7-mile-long roadway connecting Karnak Temple and Luxor Temple, in an attempt to impress tourists and attract them back after the COVID-19 outbreak caused chaos on the country’s key tourism business.

It’s the second such event in six months, after Egypt hosted a “royal procession” in April to parade 22 mummies through the streets of Cairo on their way to a newly opened museum. Officials said the event aimed to highlight Luxor, a monument-rich city that once served as Egypt’s capital, then known as Thebes, as the “largest open museum in the world,” with President Abdel-Fattah el-Sisi and his wife in attendance.

Before the event, Luxor tour guide Ahmed Hammam told NBC News, “Tonight I will be watching one of the greatest events that has ever occurred in my lifetime.” Witnessing the restoration of the Avenue of Sphinxes after years of struggle was “like a dream” for Hammam, 47.

The entire length of the route, as well as all the temples along it, will be open to visitors free of charge the day after the march, according to the Tourism Ministry. 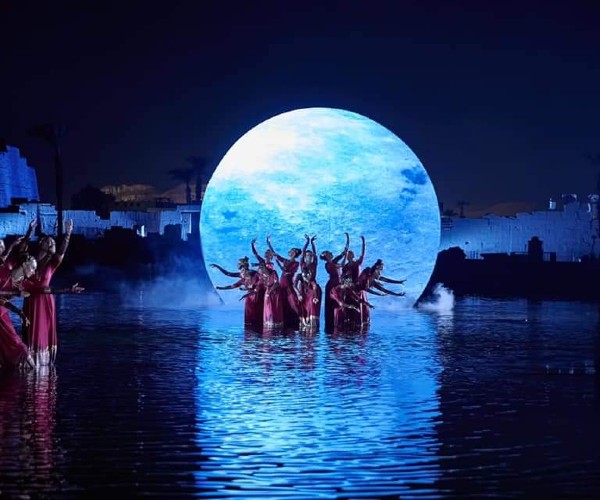 “This procession will be nothing short of spectacular,” stated restoration supervisor Dr Mostafa El Soghayar. “We expect it will beat the Royal Mummies Parade,” he told The National in April, referring to the procession of 22 ancient Egyptian mummies from the Egyptian Museum in Tahrir Square to the National Museum of Egyptian Civilization.

From 2005 to 2011, Hawass worked on the restoration of the Avenue of Sphinxes until it was interrupted by the uprising. He said the festival on Thursday sends a powerful message to the globe, saying, “Egypt is secure, and we invite everyone to return to Egypt.”

El-Sissi, 63, was re-elected to a second four-year term in 2018 after leading the military ouster of Egypt’s first democratically elected president in 2013.

He has worked hard to restore peace to the vital US ally and to bring tourist dollars back to the country, which has been rocked even harder by the Covid-19 outbreak. Opponents, activists, and independent media, according to critics, have been silenced as a result of his actions.

The best resort in the Maldives

3 Days in Amsterdam: What Not to Miss