NETIV HA’ASARA — Standing in the shadow of a 30-foot-high concrete wall, top defense officials announced Tuesday that Israel had completed construction of a massive barrier running the length of the Gaza Strip both above and, critically, below ground.

The NIS 3.5 billion ($1.1 billion) project has taken over three years to complete and is meant to end the threat of cross-border attack tunnels from the Palestinian enclave, which the Strip’s Hamas rulers have utilized to deadly effect.

“This barrier, a creative, technological project of the first order, denies Hamas one of the capabilities that it tried to develop and puts a wall of iron, sensors and concrete between it and the residents of the south,” Defense Minister Benny Gantz said at the ceremony on Tuesday afternoon.

Construction of the barrier was a massive industrial undertaking, requiring some 1,200 workers, the removal of 330,000 trucks’ worth of sand, dirt and rocks, two million cubic meters of concrete and enough rebar that if laid out in a single line would reach Australia, according to Brig. Gen. Eran Ofir, who oversees construction of defensive barriers for the Defense Ministry.

The 40-mile (65-kilometer) barrier lies all along the Gaza border and extends out to sea in order to ensure that terror groups in the Strip do not dig underwater tunnels, as they have attempted in the past.

The barrier is made up of several components: an underground reinforced concrete wall that is studded with sensors to detect tunnels; a 20-foot (six-meter) steel fence; a network of radar arrays and other surveillance sensors; and remote-controlled weaponry. The Defense Ministry also constructed a number of command centers along the border as part of the project, Ofir said.

In his speech, Gantz warned that Israel could be seeing “the calm before the storm,” following recent threats by Hamas and other Palestinian terror groups against Israel over what they say are slow reconstruction efforts in the Gaza Strip following the last conflict with Israel in May.

A portion of the 40-mile barrier along the Gaza Strip, upon completion on December 7, 2021. (Defense Ministry)

Israel and Hamas have been negotiating an extended ceasefire, which would see additional aid and international assistance flown into Gaza in exchange for calm. However, Israel has conditioned full reconstruction on the return of two Israeli civilians and the remains of two IDF soldiers held in Hamas captivity since 2014. The terror group is thought to be holding out for the release of large numbers of Palestinian terrorists in Israeli prisons in exchange, which Jerusalem has refused.

“We will continue to prepare to neutralize every attempt to harm Israeli civilians from the Strip — with the threat of rockets particularly in our sights. We will prevent Iranian knowledge and technology from reaching Gaza and we will continue to thwart every attempt by Hamas to use its proxies in the West Bank and Israel. These attempts fail time and again,” Gantz said.

The decision to construct the barrier arose after the 2014 Gaza war, known in Israel as Operation Protective Edge, which focused primarily on countering the tunnel threat.

The concern in the IDF has long been that Hamas or another terror group would use cross-border tunnels to send fighters into an Israeli community near the border, where they could kill those inside and, even if only for a short while, conquer a portion of Israel. 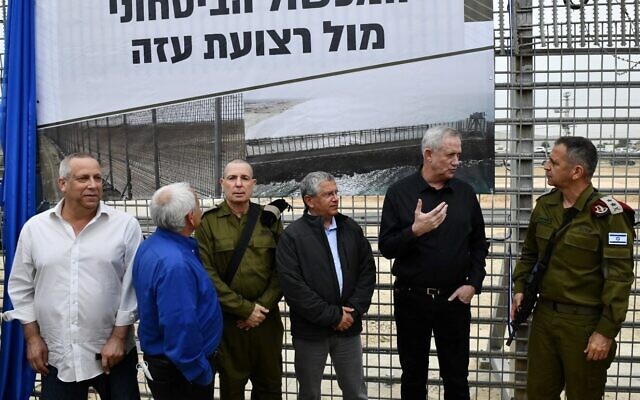 Hamas, which rules the Gaza Strip, used tunnels to carry out deadly attacks for the first time in 2004, digging under Israeli positions within the enclave and detonating powerful bombs beneath them. In 2006, Hamas members tunneled into Israel, killing three soldiers and capturing a fourth, Gilad Shalit, whom it kept captive for five years before a swap deal with Israel.

The tunnels, both border-crossing ones and those within Gaza, were used extensively during the 2014 Gaza war, though in recent years Hamas has seemingly stopped relying on them to the same extent as Israel has gotten better at discovering them.

“The barrier is reality-changing. What happened in the past won’t happen again,” IDF Chief of Staff Aviv Kohavi said in his speech at the ceremony.

In the 2014 war, IDF ground troops had to enter Gaza in order to use explosives to destroy the tunnels that Hamas had dug into Israel. In the years that followed, Israel developed new munitions and tactics that allowed the Israeli Air Force to hit tunnels from the air, rendering them unusable if not completely destroyed.

Cross-border tunnels played virtually no role in May’s conflict between Israel and terror groups in the Gaza Strip. In a few cases, Hamas attempted to use tunnels to send fighters right up to the border, with the apparent intention of having them emerge suddenly, taking the IDF by surprise, and cross into Israel. In each of those cases, however, the military identified these attempts in advance and bombed the tunnels from the air, in at least one case with the fighters still inside. 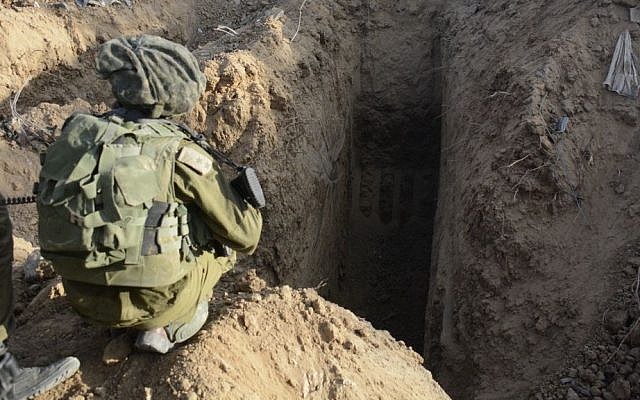 A Hamas tunnel discovered by soldiers from the Paratroopers Brigade in the northern Gaza Strip on July 18, 2014. (IDF Spokesperson/Flash90)

While praising the defensive barrier and the country’s protective proficiency in general, Kohavi also stressed that Israel was also improving its offensive capabilities.

“We remember that a decisive victory is only obtained through attack and we are constantly and significantly strengthening that as well — particularly against Iran in the past year,” Kohavi said, referring to the military’s preparations to strike Tehran’s nuclear program.

Speaking to reporters on Tuesday, Ofir, who has led every major barrier construction project in Israel in recent years — notably along the Egyptian and Lebanese borders — refrained from declaring the threat of tunnels to be officially over, and noted that there were still weak spots in Israel’s Gaza defenses that could be exploited, but said he was nevertheless “proud” of the barrier. 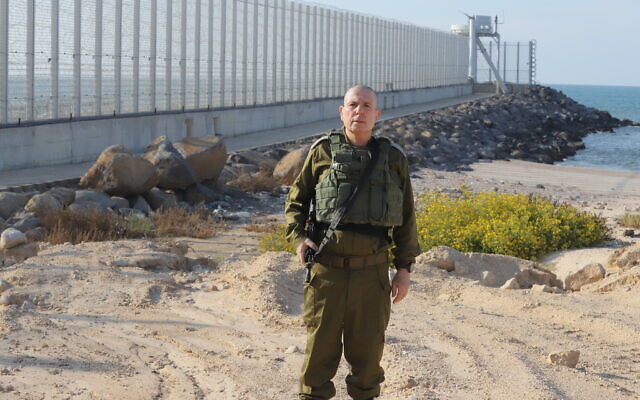 “I can sign off on the fact that there is a big, significant system that is meant to ensure that no tunnels enter the State of Israel. There is no 100 percent sign-off on anything in life, but we believe that this underground wall gives a very good solution to this issue,” he said.

Asked about Hamas’ efforts to “challenge” the new border barrier, Ofir said that despite the wall’s completion, the military was constantly working to ensure that the terror group did not cross the border.

He said construction was a profoundly complicated process given the fighting that commonly flares up along the frontier. 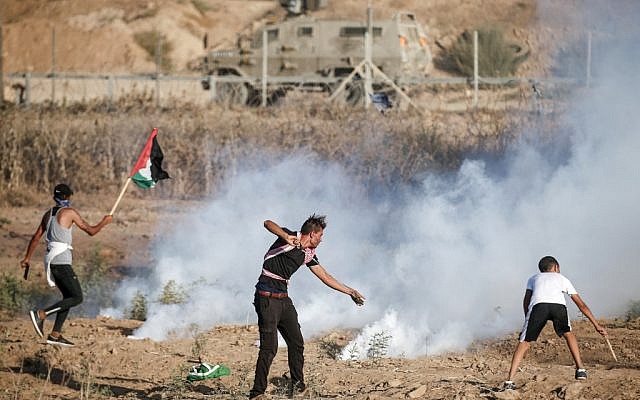 A Palestinian loads a slingshot with a stone to be hurled at Israeli forces during clashes along the border with Israel, east of Bureij in the central Gaza Strip, on September 6, 2019. (Mahmud Hams/AFP)

“The work was anything but simple. We endured 15 rounds of fighting; they shot at us; we worked under fire, but we almost never stopped working. Only in one case when they opened fire at us did we stop working and even then only for a few hours before we came back,” Ofir said.

With the Gaza barrier constructed, the Defense Ministry is now turning its attention to the Lebanese border, where an existing border fence has long been decried as insufficient.

The current defense budget includes funds for a similar concrete and steel barrier along the Lebanese border in order to prevent or at least mitigate the threat of Hezbollah infiltrations.

Which Do You Need? • PhotoTraces