European diplomats expressed “disappointment and concern” on Friday after five days of international negotiations in Vienna on reviving the 2015 Iran nuclear deal, as Iran submitted two draft proposals that appeared to undo months of dialogue.

Senior diplomats from the E3 group of Britain, France and Germany expressed “disappointment and concern after thoroughly and carefully analyzing Iranian proposed changes to the text negotiated during the previous six rounds,” which took place earlier this year.

“Tehran is walking back almost all of the difficult compromises crafted after many months of hard work,” they said, adding that the Iranian delegation had demanded “major changes.”

They went on to say it was “unclear how these new gaps can be closed in a realistic timeframe.”

The latest round of talks began on Monday between the E3, Iran, China and Russia, with the United States participating indirectly.

Diplomats were aiming to revive the 2015 deal, which began unraveling in 2018 when then-US president Donald Trump pulled out of the deal and reimposed sanctions, prompting Iran to start exceeding limits on its nuclear program the following year.

The closing Joint Commission is starting in Vienna. The sides will review the progress of this round of negotiations & decide a date for the next round. They will return to their capitals for consultations. pic.twitter.com/H0sGav4K12

The diplomats said the delegations needed to “return to capitals to assess the situation and seek instructions, before reconvening next week to see whether gaps can be closed or not.”

“Our governments remain fully committed to a diplomatic way forward. But time is running out,” they said.

Iran said on Thursday it had submitted two draft proposals for the nuclear agreement.

“The first document sums up the Islamic republic’s point of view concerning the lifting of sanctions, while the second is about Iran’s nuclear actions,” Bagheri told state television.

An E3 diplomat told Israel’s Walla news that the draft on sanctions relief was extreme and maximalist, with the Iranians increasing their sanctions relief demands in comparison to agreements reached with the Rouhani government last June.

The talks had resumed in the Austrian capital on Monday after Iran paused them in June following the election of ultraconservative President Ebrahim Raisi.

The diplomat also told Walla that Iran had backtracked on the nuclear draft too, removing all the previously agreed compromise language on steps to roll back its nuclear program.

1 The nuclear negotiators for the E3 – France, Germany and the UK – in coordination with the U.S. told Iranian negotiators in Vienna that the opening proposals they presented in the talks this week were not serious and unacceptable, an E3 diplomat briefed on the talks said

“The Iranians have been told their proposals are not serious and they are to go back to Tehran and get further instructions,” the diplomat said.

Iran’s semi-official ISNA news agency said the talks would “most likely” resume on Monday. But French President Emmanuel Macron warned there could be a longer break in the talks, which only resumed on November 29 after a five-month break.

Speaking on a visit to the United Arab Emirates, just across the Gulf from Iran, the French president said it “should not be excluded” that this round of talks “does not reopen swiftly.”

Including the Gulf states and Israel

In comments likely to please his Gulf hosts but anger Iran, Macron said a broader framework might benefit the talks on bringing Washington back into the deal.

He appeared to suggest bringing the Gulf states and even Israel into the talks, although having Iranian and Israeli envoys at the same table would seem inconceivable.

“I think everyone is conscious of the fact that not talking, not trying to find a new framework on both nuclear and regional issues, weakens everybody and is a factor in increasing confliction,” the French president said.

“It is also important to reengage a slightly broader dynamic and involve regional powers as well,” he added.

“It is difficult to reach an agreement if the Gulf states, Israel and all those whose security is directly affected are not involved.” 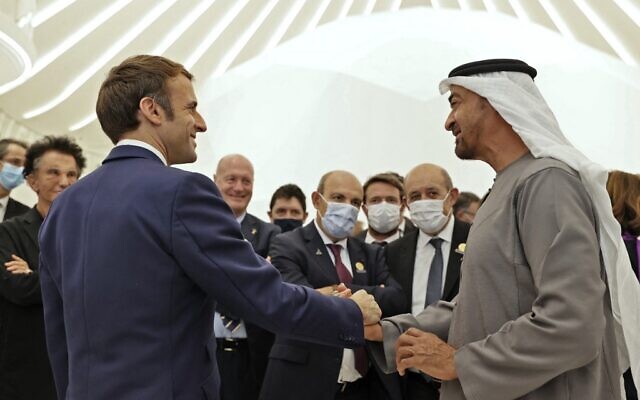 French President Emmanuel Macron (L) is greeted by Abu Dhabi’s Crown Prince Mohammed bin Zayed al-Nahyan during his tour of the French pavilion at the Dubai Expo on the first day of his Gulf tour, on December 3, 2021. (Thomas Samson/AFP)

On Thursday, Prime Minister Naftali Bennett called for an “immediate cessation” of the nuclear talks, accusing Iran of “nuclear blackmail.”

In a phone call with US Secretary of State Antony Blinken, Bennett called instead for “concrete measures” to be taken against the Islamic republic.

The goal of the JCPOA is to make it practically impossible for Iran to build an atomic bomb, while allowing it to pursue a civilian nuclear program. Iran denies wanting a nuclear arsenal.

Blinken said Thursday it was not too late for Iran to revive the 2015 deal, but cautioned that hopes for the success of the talks were wearing thin.

“I think in the very near future, the next day or so, we’ll be in a position to judge whether Iran actually intends now to engage in good faith,” Blinken told reporters in Stockholm on the sidelines of a meeting of the Organization for Security and Co-operation in Europe. “I have to tell you, recent moves, recent rhetoric, don’t give us a lot of cause for optimism.”

“But even though the hour is getting very late, it is not too late for Iran to reverse course,” Blinken added.