Foreign Minister Yair Lapid on Monday demanded Turkey shut down the offices of the Hamas terror group operating in the country after Israel announced the arrests of a sophisticated 50-member West Bank cell being directed from Istanbul.

“Hamas’ offices in Istanbul will be shut down. We must prevent these heinous acts of terrorism against Israeli citizens everywhere and under any conditions,” Lapid said, a day after another Hamas terrorist carried out a deadly terror shooting in Jerusalem.

He urged other nations to follow the example of the United Kingdom, which announced last week that it intended to ban Hamas in its entirety and stop differentiating between its political and military wings.

“The countries of the world must act like Britain and outlaw Hamas,” he said.

Lapid spoke out soon after Israel’s Shin Bet security agency revealed that it busted a major Hamas cell, arresting 50 of its operatives.

According to the Shin Bet, the Hamas cell was led from Turkey by Saleh al-Arouri, deputy head of the terror group’s politburo, and Zacharia Najib, a member of the organization who was released from Israeli prison in the 2011 Gilad Shalit exchange, where they allegedly continue to operate on behalf of Hamas.

Both al-Arouri and Najib live in Turkey, which has long had a close relationship with Hamas, which is politically linked to Turkish President Recep Tayyip Erdogan.

Ismail Haniyeh, right, the head of the Hamas political bureau, shakes hands with his deputy Saleh al-Arouri, upon his arrival in Gaza from Cairo, Egypt, in Gaza City, August 2, 2018. (Mohammad Austaz/Hamas Media Office via AP)

Given the links to Turkey, Israel reportedly held off on announcing the arrests, originally planned for 10 days ago, until it managed to secure the release of an Israeli couple who were being held in Turkey on spying charges, the Kan public broadcaster reported.

Mordy and Natali Oknin, bus drivers from the central city of Modiin, were released last week after being held for eight days for suspected espionage after photographing Erdogan’s palace. 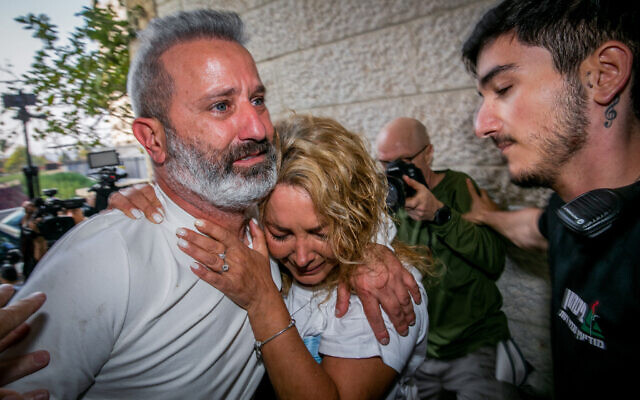 Mordy Oknin (left), who was jailed along with his wife Natali for photographing the Turkish president’s palace, arrives at their home in Modiin, November 18, 2021. (Yossi Aloni/Flash90)

Following their return to Israel, the government specifically thanked Erdogan for his role in setting them free and Prime Minister Naftali Bennett and President Isaac Herzog both held calls with the Turkish leader.

Kan said that Israel had delayed reporting on the arrests, which began with a round of raids in September, for fear of embarrassing Erdogan and hampering efforts to free the Oknins.

The eventual announcement came a day after a Hamas terrorist carried out a deadly shooting attack in Jerusalem, killing Eli Kay, a 26-year-old immigrant from South Africa, and wounding two others.

Kan, quoting security officials, said they believed that had received his instructions for the attack there. 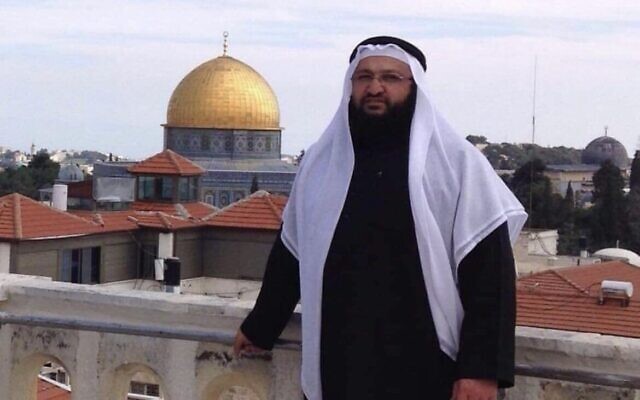 Fadi Abu Shkhaydam, the terrorist who killed an Israeli civilian and wounded four others in a shooting attack in East Jerusalem’s Old City on Sunday, November 21, 2021 (Facebook)

However, family members interrogated by the Shin Bet denied this, saying he traveled there to visit his son who is a student in Turkey, and to deal with a property he owned there.

The cell was one of the largest discovered in recent years.

According to the Shin Bet, over 50 Hamas operatives were arrested across the West Bank for suspected involvement in the cell and large quantities of weaponry was seized, including the materials needed to make at least four explosive belts for suicide attacks. An undisclosed amount of money that was allegedly used by the cell was also seized in the raids, according to the Shin Bet.

“This was a major preventative effort that thwarted dangerous terrorist infrastructure, which was planning serious attacks. The goal of the terrorist activities, which were undertaken by Hamas operatives abroad and in Gaza with operatives in the West Bank, was to destabilize the region, while exacting a heavy price from local residents,” a senior Shin Bet officer said, referring to the toll on Palestinians in the West Bank. 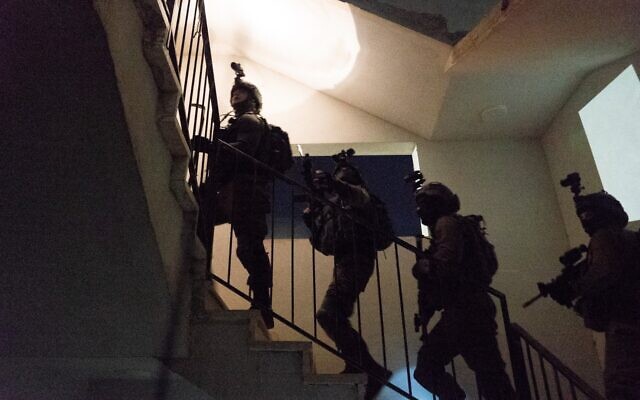 An undated photograph showing Israeli forces raiding a home as part of an effort to break up a major Hamas cell planning terror attacks on Israeli targets in the West Bank and Jerusalem. (Israel Defense Forces)

According to the Shin Bet, the cell was planning “to carry out terror attacks in a number of formats in the West Bank and Jerusalem, as well as the possibility of carrying out bombings in Israel.”

The Haaretz daily reported that Israeli officials were disturbed by the cell’s level of complexity, both in terms of its plans and the arms it had at its disposal.

They also noted the willingness of the members to fight and confront IDF forces who came to arrest them. In one September raid, two Israeli soldiers were seriously injured and several Palestinian suspects were killed in gunfights.

They also highlighted the fact that these were the first concrete plans to carry out a suicide bombing inside Israel discovered in the last five years.

While announcing the arrests, the IDF also released footage taken from the helmet cams of soldiers who took part in the raids.

Finland and Sweden want to join NATO. Here’s how it works and what comes next

Ukraine claims battlefield successes in northeast as Russians fall back